History of the American Buffalo (Bison)

The American Buffalo is also commonly known as the American Bison. Some consider the word "Buffalo" a nickname for this animal, as it is distantly related to either of the two "true buffaloes", the African Buffalo and the Asian Water Buffalo. Bison is a Greek word meaning ox-like animal, while the word Buffalo originated with the French fur trappers who called these massive animals’ bœufs, meaning ox or bullock. So both names, "Bison" and "Buffalo," have a meaning that is similar. The term "Buffalo" dates to 1635 and has a much longer history than the term "Bison," which was first was cataloged in 1774. The American Bison is closely related to the European Bison.

The American Bison once roamed the grasslands of North America in gigantic herds. They compassed a roughly formed triangle between the Great Bear Lake in Canada's Northwest Territory, south into Mexico, and east besides the western boundary of the Appalachian Mountains.

Numbering in the millions prior to the arrival of Europeans in North America, the Buffalo is cherished by Native Americans. It was the main livelihood for the plains Indians, who used every part of the animal for clothing, shelter, and tools, as well as food. 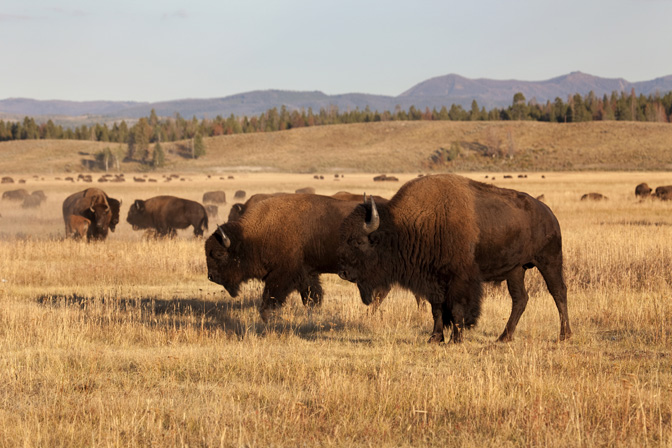