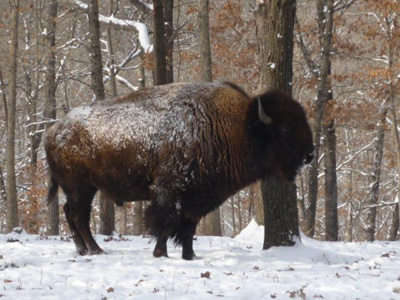 The American Bison/Buffalo is the largest land animal in North America. Males can stand six feet from hoof to shoulder and usually weigh between 1,000 to 2,000 pounds. Females are around five feet tall and usually weigh between 500 to 700 pounds. The Bison have a long ragged brown fur, a mane, and beard under its chin and a long tail with a cluster of hair at the end.  A Bison's thick fur offers enormous protection against harsh elements. Their winter coat is so heavy and well insulated that snow can cover their backs without melting. Both sexes have horns.

Bison/Buffalo move gradually as they eat so that they hardly ever overgraze an area. They usually roam great distances each day. Bison feed on grasses, herbs, shrubs, and twigs. They regurgitate their food and chew it as cud before final digestion. Bison/Buffalo mostly eat in the mornings and evenings while going to water perhaps once a day.

Grooming is an important daily activity. Bison scrub their heads, necks, and sides on trees, branches and tree trunks. They like to wallow in dust or mud. Bison/Buffalo grunt while on the move and make a roaring sound when mating. Bison have poor eyesight, but have a highly developed sense of smell along with good hearing. They will charge when cornered. Bison can reach speeds of up to 35 miles per hour.

The Cow Buffalo often leads the family. Bison Bulls remain solitary or in smaller groups for most of the year, but come back to the group during breeding season.

Unlike most other outfitters, at High Adventure Ranch, YOU keep the Head, Horns, Hide & Meat!