How to Cook Buffalo / Bison Meat 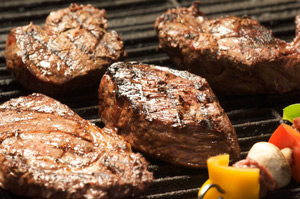 As with every meat, cooking directions vary with the cut. In general, steaks and ground buffalo are very lean, and will cook in about one-half the time it takes to cook a comparable cut of beef. Be aware that the temperature of your meat prior to cooking and grill temperature will alter the cooking times.

Bison/Buffalo meat, in simple grilled preparations, should be seared, turned quickly, and then cooked further at a reduced temperature, and can be served rare to medium temperatures (180 to 200 degrees F).

Using a fork to turn steaks tends to puncture the meat, so use tongs for turning and keep those wonderful juices in the steak. Grill Bison/Buffalo over a low charcoal heat, not in the flames.

When preferred, broil buffalo a few inches further away from the heat.

Turn the Buffalo meat a little sooner than you would with beef, and use a sauce, marinade or baste to keep it moist.

When roasting Buffalo meat or substituting it in a beef recipe, set your oven to 275 degrees or 50 degrees less than the beef recipe called for. Your roasting time should be about the same.

Use the same "safe meat handling" methods you would use for beef and other meats.

Individual cuts of buffalo are identical to beef, except for prior to cooking, buffalo is a deeper red. This is due to the fact that buffalo does not marble (produce internal streaks of fat) like beef.

Caution must be taken to guarantee that you do not overcook buffalo.

Cook all ground meats to a temperature of 160 degrees, using a meat thermometer.

The best-tasting Bison/Buffalo is cooked rare to medium, instead of well-done.